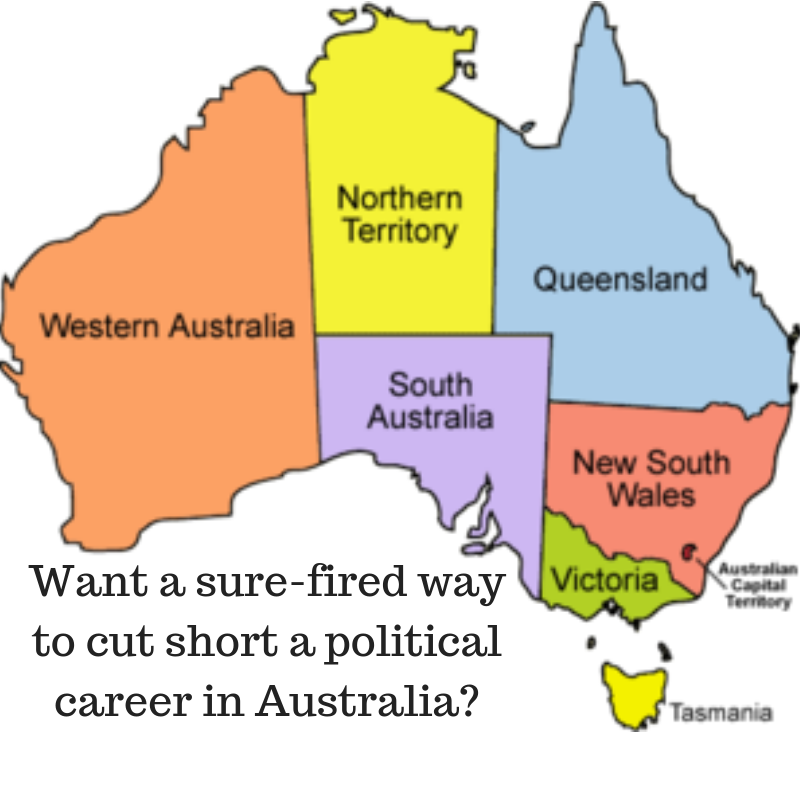 Murray Hogarth: On My Watts

In this post I’m going to break down how Trump-like anti-environmental political positions have already demonstrably failed in the Australian political landscape. I explore how more carefully-calculated progressive approaches, ones that strategically embrace renewable energy and climate action, are proving far more attractive to voters in the so-called ‘sensible centre’.

In my analysis, the big winner from this is the Australian Labor Party, the big loser is the Liberal National Coalition, the Australian Greens are being sidelined to catalyser status, and the likes of One Nation become even further marginalised.

How do I figure this? Where’s my evidence?

Well, in my mind – I’m not a spreadsheet kind of guy – I’ve broken down territory, state and national election results over roughly the past decade. This is the crucial period that began when a virulently anti-climate change action trend took off towards the end of 2009, becoming an identity badge for ultra-conservatives around the world.

In Australia, this kicked off in earnest with the surprise emergence of the highly-adversarial, climate science doubting Tony Abbott MP as Liberal Opposition Leader, displacing the more consensus-minded and climate action-inclined Malcolm Turnbull. Then flaky Labor PM of the day Kevin Rudd wimped it on meaningful climate action, post the Copenhagen UN climate summit debacle, and all hell broke loose.

I’ll come back to that. But first, let me digress.

Here’s the thing. I grew up in the infamous Bjelke-Petersen National Party gerrymander era, in the Queensland of the 1960s and ’70s. So I know crazy-brave conservative politics and the embrace of culture wars when I see it. Fortunately, though remaining a Cane Toad for State of Origin purposes, I defected to the dreaded south (aka Mexico) – settling in Sydney via Canberra – in the 1980s.

Why am I burdening you with this personal history?

Well, the past weekend’s state election outcome in Victoria has inspired me to reprise my journalism days*, in an outbreak of standing-desk versus armchair political analysis, directed primarily to this question:

Who’s worked out best how to play the ‘environment, climate change, and renewable energy card’ in the Australian political landscape?

I’d like to throw a bit of evidence into my analysis, however unfashionable that might be in the current diminished era of politics, where ideological rants trump considered science and data-based decision-making.

While I had my issues down through the earlier decades of my voting years with successive prime ministers Malcolm Fraser, Bob Hawke, Paul Keating and John Howard, in retrospect they were all proficient and productive political figures who treated leadership of the nation as a serious responsibility. For the most part they kept discordant ideological urges in check, and empowered their Cabinets and individual Ministers to make their governments stronger based on the sums of their parts.

Nationally, that’s not what we’ve been served up in the past decade or so, from any side of politics, although there have been some exceptions at the margins if not in the mainstream. Especially some of the more impressively public-spirited Minor Parties and Independents (I don’t mean you, Pauline) – though in my humble opinion history will be kinder to Julia Gillard on the Labor side and Julie Bishop from the Liberals than either of their party’s numbers-crunchers ever were.

The Queensland and Victorian Factors

So what have I got?

The first really significant election post the 2009 Abbott insurgency, and subsequent Rudd collapse in 2010 (cue Julia Gillard, who barely survived an election that year and became minority Labor Government PM with Independents and Greens support), was the Queensland state election of 2012, in which conservative LNP Leader Campbell Newman crushed a politically exhausted multi-term ALP Government with a 13.7 percent swing. Handed what seemed like a huge mandate to change the agenda, Newman made many extreme policy shifts, including demolishing climate action and environmental positions.

That must have seemed like a resounding success, at first. Newman set a climate-bashing model for Tony Abbott to follow enthusiastically when he won the Prime Ministership of Australia in 2013, with a resounding electoral win over a briefly reinstated Rudd who’d pushed out Gillard in revenge for his ousting by her three years earlier. Only problem is that Newman crashed out at the next Queensland state election in 2015, with a 14 percent counter-swing against his reactionary government delivering a shock win to Labor led by Annastacia Paluszczuk, who swung policy back towards meaningful climate action (even if still juggling support for new coal mines at the same time).

Meanwhile, in Victoria, a Coalition Government that had been elected in 2010 was displaying Newmanesque policy positions of its own, projecting anti-environmentalism as a populist platform. It too only lasted a single term, like Queensland’s Newman Government, falling in 2014 to an ALP bounce-back led by current Victorian Premier Daniel Andrews, who has just won a second-term in what he calls ‘Australia’s most progressive state’ last weekend.

That’s one term only for anti-climate action state governments in Queensland and Victoria, even though both had followed multi-term Labor governments, and in normal circumstances once Australian voters change their government they historically more often than not grant them two terms to prove their agenda, if they can.

In 2015, Tony Abbott became a less-than-one-term PM when he was dumped by his own party in a leadership coup, ushering in the return of Malcolm Turnbull to the Liberal Party leadership, and thus the prime ministership. So I’m seeing a pattern here. Are you?

It’s that overt anti-climate, anti-environment positioning doesn’t work in Australia, which is a land of the sensible centre, and has compulsory voting as a bulwark against the circumstances that have inflicted President Donald Trump on voluntary-voting America (author Bill Bryson has written that ‘Australia and America are 90 percent the same, but that the 10 percent difference is huge’).

More importantly, I think, the lesson is that restraint and subtlety is required in how environmentally-positive policies are incorporated into election platforms that still put the big-ticket policy areas like health, education, law and order, and infrastructure at the forefront, but use ‘greener’ and ‘socially conscious’ as powerful validation points for progressive audiences, including but by no means limited to younger voters.

This is the ‘policy key’ that Labor in Victoria, Queensland and also the ACT have clearly understood and embraced, and that their more extreme conservative opponents have neglected, or in some cases trampled all over. Federal Labor has seen it too, aided by an intellectually-competent Shadow Minister for Climate and Energy in Mark Butler MP. Opposition Leader Bill Shorten also appears to be internalising the same green-and-socially-progressive tinged electoral secret sauce, based on last week’s Labor energy policy launch hosted at Bloomberg New Energy Finance in Sydney.

If I had to critique my own thesis, and I will, then I’d look mainly to three other states, New South Wales, South Australia and Tasmania:

So what are my predictions from here? Try these:

The key point is that to be mainstream-electorally successful in championing the environment, the agenda has to be delivered in a sophisticated way that augments a progressive approach to the key policy areas like health, education and even law and order, but doesn’t seek to overpower them. Getting this right (and I don’t mean ‘Right’) means perfecting targeted and credible messaging to greener and more socially progressive voters while continuing to be disciplined on the big socio-economic issues that inevitably will continue to dominate the political landscape.

*Murray Hogarth is Director of Communications and Community Networks for Wattwatchers Digital Energy, based in Sydney. He’s a former journalist, in print and television, including stints in the Canberra press gallery for The National Times late in the 1980s; as an on-air reporter in the first half of the 1990s for ABC TV current affairs flagship programs The 7.30 Report and Four Corners; and as Environment Editor at The Sydney Morning Herald in time for the landmark Kyoto Climate Summit in 1997.