My town wants a local microgrid: where do we start? 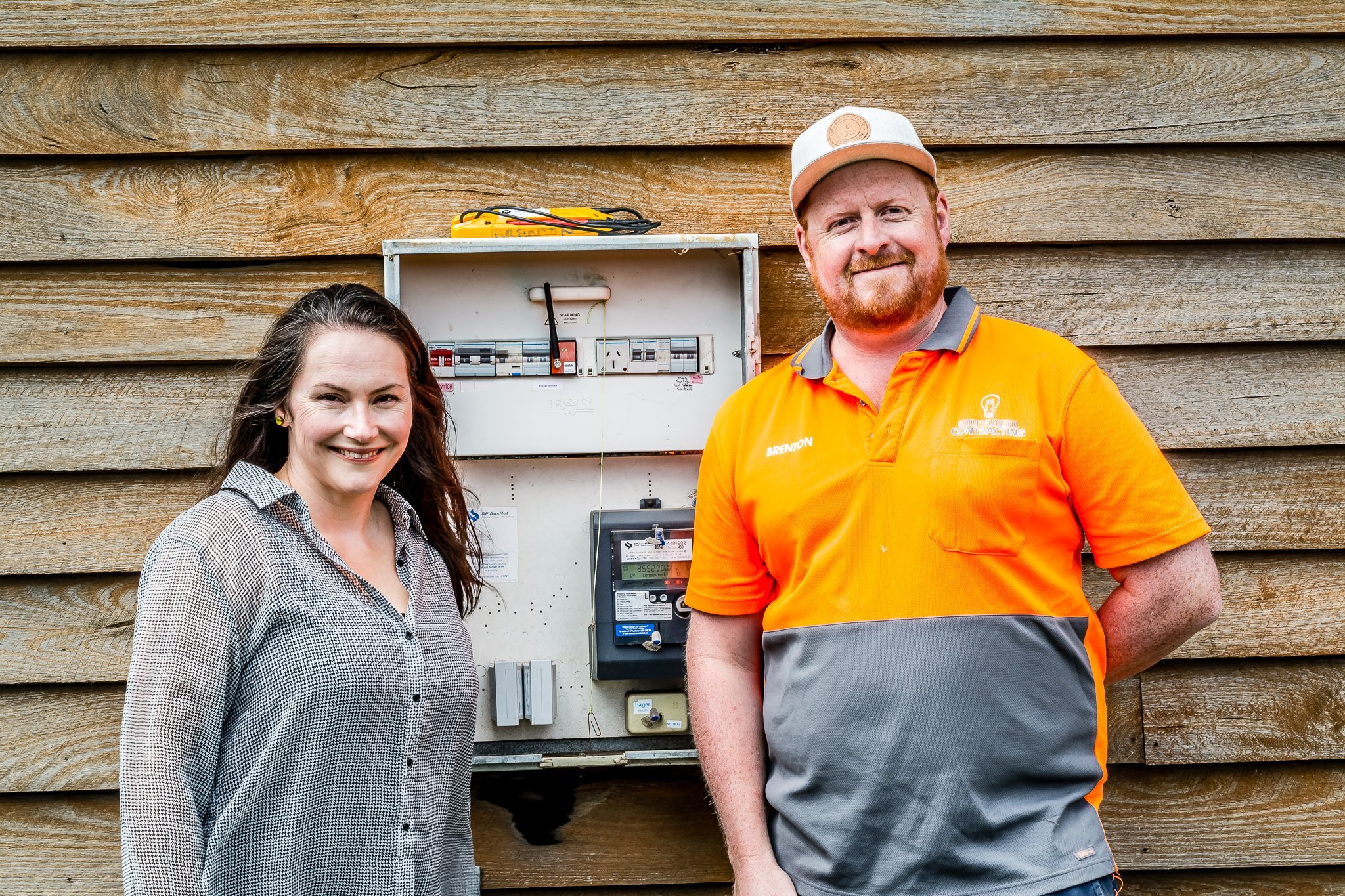 There are many communities around Australia, and the world, harbouring ambitions to improve their energy supply, and even run their own mini electricity systems. Wattwatchers co-leads the MyTown Microgrid project in the historic Victorian timber town of Heyfield, a three-year feasibility study now close to reaching its half-way point. (Feature image shows Heyfield project community liaison officer Emma Birchall with local electrician Brenton Stuart.)

Creating a microgrid is a relatively straightforward proposition if your community lives on an island in the middle of an ocean – like Lord Howe Island, in the Tasman Sea, 600km off the New South Wales coastline.

No-one was ever going to run a power cable that far, for a population of several hundred, so if the people of Lord Howe want electricity they need local generation. In the lexicon of power systems, this literally means a ‘fully-islanded’ microgrid, operating independently of any larger electricity grid.

In their case, it used to just be diesel-powered generation, a costly and polluting fossil fuel that had to come in by supply ship. But now they have clean solar energy and battery storage too, which emerged as the favoured option after a combination of solar panels and wind turbines was also considered.

However, on mainland Australia, where the grid runs past your front door, it is a little different.

BREAKOUT: WHAT IS A MICROGRID, ANYHOW?

A microgrid is a small-scale electric power production and delivery system. It comprises a collection of distributed generation and storage facilities (e.g. rooftop solar, wind turbines, batteries … and also diesel generators) located near the loads they serve (e.g. rural communities, remote facilities, metropolitan suburbs and industrial zones). They can vary significantly in size, from only a few buildings in large industrial facilities and entire communities. Microgrids also feature their own power system autonomy complete with controls, protection and operating algorithms. In some instances microgrids can remain connected to the main grid and transition between grid-connected mode or autonomous ‘island-mode’. This allows them to provide reliability support when the main grid is unavailable.

MODIFIED FROM THIS ORIGINAL SOURCE: Microgrids – The Way Forward

A microgrid can be defined as a group of homes and businesses who use, generate and share electricity. It may be able to function both as part of the grid, and autonomously.

Heyfield, population circa 2000, is located in the East Gippsland region of Victoria, about 200km from Melbourne. It’s the host community for the MyTown Microgrid project, which is jointly led by the Heyfield Community Resource Centre (HCRC), Wattwatchers Digital Energy and UTS Institute for Sustainable Futures.

This community wants a microgrid too. But the Heyfield scenario is very different to the Lord Howe one.

Instead of being surrounded by ocean, Heyfield is in the midst of farmlands and bush – and one of the largest electricity grids in the world. Known as the NEM, standing for the National Electricity Market, it covers most of the eastern part of Australia – with Heyfield located near the heart of the old brown coal generation hub, in the Latrobe Valley. with the local electricity network managed by AusNet Services.

Network businesses such as AusNet Services are often called the poles-and-wires companies. Their job in the often confusing world of electricity systems is to distribute electricity to homes and enterprises, mainly on low-voltage networks where everyday consumers draw their power. They get paid to deliver the electricity, and to maintain its quality and supply.

Actually doing this can be an increasingly tough job in a climate change world with worsening extreme weather, bushfires and the like; plus the rapid and ongoing transformation of the grid from highly-centralised, mainly fossil fuel generation to the proliferation of distributed energy resources (DER), especially rooftop solar, battery storage and now electric vehicles (EVs) coming too.

This is the context in which interest in local microgrids is taking off, and not just in Heyfield.

It’s worth mentioning that AusNet Services is one of the supporting partners for the Heyfield local microgrid feasibility study, along with the Victorian Government’s Latrobe Valley Authority, Federation University, RMIT, the Public Interest Advocacy Centre and the Community Power Agency.

Microgrids are already part of the business model for some network businesses, with examples including Ergon Energy in Queensland and Horizon Power in Western Australia, and they may well be part of AusNet Services’ future too.

But, as the feasibility study is now investigating, is Heyfield the right place to start dividing their sprawling regional network into some smaller chunks?

The origins of a microgrid story

For Wattwatchers, the MyTown Microgrid project began in 2017 in an innovation workshop series called A-Lab, run by the Australian Renewable Energy Agency (ARENA).

The origin story premise was that even taking a single home ‘off grid’ is a significant job requiring the right equipment, supporting technologies and installation skills, plus a good budget. So looking to do it for a whole town or community is a big deal, requiring deep community engagement, weighing of various options, extensive engineering evaluation, and informed decision-making.

By chance, one of the founding local champions of a Heyfield microgrid, Ian Martin, was at the ARENA A-Lab and saw the prototype ‘MyTown Microgrid’ concept taking shape. AusNet Services was there too.

Wattwatchers later shared the concept with UTS ISF, which was working on its own similar path for local microgrids, but it still took a couple of years before two vital ingredients came together: an enthusiastic host community, Heyfield; and a $1.75 million grant funding opportunity in the shape of the Australian Government’s $50 million Regional and Remote Communities Reliability Fund and its Microgrid Program, topped up with $100,000 from the Victorian Government’s Latrobe Valley Authority.

There’s a lot of government interest in local microgrids, as well as community buy-in, and the electricity industry is watching closely too.

Microgrid, or some other local energy solution?

Heyfield has an award-winning history of community energy initiatives for energy efficiency, carbon emission reductions and renewable energy. It has high levels of rooftop solar installation, on homes and businesses in the town, but also out on the energy-hungry dairy farms nearby.

It has a modern timber milling and manufacturing operation, Australian Sustainable Hardwoods, which already generates large amounts of heat for drying kilns by burning sawdust – a renewable biofuel byproduct – and has potential to generate electricity as well. There’s also a modest-sized hydro generation plant on nearby Lake Glenmaggie, although the power generated there goes to a nearby town, Maffra, rather than to Heyfield.

Arguably the most powerful energy force in Heyfield, however, is its people themselves, personified by longtime HCRC mover-and-shaker Julie Bryer. She speaks to a microgrid vision for her community which would make its electricity cleaner, fairer, more reliable and more affordable than current arrangements under the NEM (which is where the majority of Australians connect to receive their electricity).

But can Heyfield achieve a fully-islanded microgrid like Lord Howe Island? Or will its most-feasible local energy solution be something different?

There are, in fact, many possibilities: a partially-islanded, or ‘islandable’ microgrid which still has backup from the NEM? A local energy cooperative, or community retailer, which overlays the area’s NEM infrastructure? A virtual microgrid or power plant? Local energy trading? Community storage battery? A critical facilities battery backup for emergencies? The list goes on.

At the same time, the regulatory environment is evolving in real-time to allow more community involvement, as this recent article from One Step Off The Grid confirms.

The project looks beyond Heyfield to other communities

The MyTown Microgrid project, as distinct from the community itself, has two main jobs.

The first is to provide the Heyfield community with a comprehensive feasibility study for a local microgrid, or failing that a customised community energy solution which the people of Heyfield can embrace. Second is a decision-making tool and process for other local communities to use to evaluate their own potential and options for a microgrid.

If this sounds in any way simple, it isn’t!

As things stand, the current rules for the NEM don’t really contemplate a grid-embedded community like Heyfield opting out, if that’s what ends up being proposed. The costs could be substantial, and as yet are unquantified. And what comes after? Who would operate a local Heyfield microgrid, and how would it manage its customers in the local community? What are the risks?

Thanks to the grant funding, the Heyfield community is able to tap into multi-disciplinary research and engineering expertise that usually might not be available to the thousands of similar towns around the country. Vast amounts of information and data are being accumulated, from over 100 residential, business and school sites being monitored and aggregated data-wise by Wattwatchers; a detailed survey of individual sites using the Ecologic Apps tool; additional site data being collected from billing; and important network topography and other data being provided by AusNet Services.

There’s a sustained investment in community engagement and participation, expert engineering assessments on the ground, data gathering and analysis, techno-feasibility modelling, business model exploration and development, and at the end the reporting of outcomes and acquittal of the grant funding.

The Heyfield project’s very hands-on Community Reference Group has a lot to consider. But whatever happens, Heyfield is now well on its way to becoming one of Australia’s most data-driven, and energy-aware and engaged communities. Which is no bad thing in itself!

BREAKOUT: HEYFIELD SNAPSHOT THROUGH THE DATA

Wattwatchers is monitoring a range of sites in the Heyfield town and surrounding area to get a broad sample of the different types of properties, consumption patterns and network conditions around Heyfield.

An aggregated view of our devices, captured in the Wattwatchers ADEPT IoT integration platform (screenshots above and below), indicates that our participants have excess solar at the monitored sites often between 8am and 4pm (but to 1pm on this day likely due to cloud cover).

Chart showing late spring daily minimum at 4am and peak at 10am.

Chart showing winter minimum load at 2am and peak loads at 8am and 6pm daily.

All Posts »
PrevPreviousAssumptions are all very well, but real data takes out solar guesswork
NextHow to get rewarded for sharing your home energy data with researchersNext