How to reinvigorate home energy efficiency by unveiling its true value 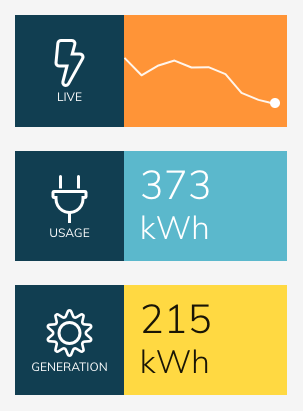 Murray Hogarth: On My Watts

This post is three stories, but they all add up to one argument to make homes ‘energy smart ready’. There’s a meaty family anecdote, a serious national socio-economic opportunity, and a recipe for technology-enabled change.

The unifying theme is energy efficiency and how its value for people, households and the built environment transcends mere dollars and cents.

Of course money is still an important part of the ‘value stack’ that can be built around making homes more sustainable, starting with cutting energy waste, but reducing power bills is by no means the whole story.

The other sources of value include reducing greenhouse gas emissions, advancing the transition to renewable energy, the self-empowerment that comes from individual action and independence from ‘the system’, better health and social well-being outcomes, enhanced property values, and more.

All of this adds up to a compelling case for the new-build housing sector to plan, design and install for energy efficiency, and indeed clean energy, proactively. It also makes a strong case for doing the same to retrofit established homes. Here’s why:

STORY 1: The personal power of saving electricity at home plays a starring role in a new book by my partner Natalie Isaacs, the founder and driving force of women’s climate action organisation 1 Million Women*, who are big on Facebook.

In Every Woman’s Guide to Saving the Planet (ABC Books/HarperCollins 2018), which has just been released in Australia and internationally, Natalie describes the source of her own climate action epiphany.

Over a decade ago, Natalie felt so empowered by successfully cutting 20% off her home electricity consumption that she went out and created 1 Million Women, selling off the cosmetics business she’d built up over two decades, and reinventing herself totally.

Her wider message, for which she and 1 Million Women have been recognised by the United Nations and the global climate fraternity, is that even small practical actions by individuals make a difference; and have a powerful flow-on effect by igniting more action, and by mobilising community confidence to demand that corporations and governments act decisively as well.

Also this month, Natalie has been a special guest at the Global Climate Action Summit in California, having been selected among its 22 international Climate Action Trailblazers to ‘show through their actions that everyday people can do extraordinary things’.

Next year 1 Million Women will mark its 10th anniversary, and with nearly 400,000 members on its website, and heading for 700,000 on its Facebook, this vibrant community is already breaking through its founding aspiration of a million women and girl followers. It’s a big payback for saving 20% off one electricity bill for one household, and carries a bigger message.

TAKEAWAY: Don’t reduce energy efficiency to a denominator, such as X amount of effort only equals Y amount of dollar savings, as though the true value is isolated, currency-bounded and unspectacular. Look instead for its numerator potential, how one action can create some useful dollar value in its own right, but also can unlock the potential for a lot more value, in diverse forms, and then multiply it – sometimes in unexpected directions.

STORY 2: When Energy Consumers Australia (ECA) wanted to understand the true value of household energy efficiency as part of its PowerShift work, it retained the services of leading economics group ACIL Allen Consulting. The ECA exhibits a deep commitment to research and evidence-based policy-making, so it is no surprise it commissioned ACIL Allen to produce ‘Multiple Impacts of Household Energy Efficiency: An Assessment Framework’ (October 2017). 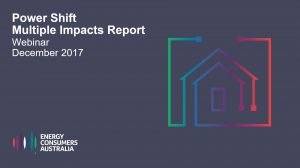 The ACIL Allen report immediately attributes the historically limited scale of government-funded household energy efficiency schemes  to the narrow scope of previous assessments of the value impacts, both costs and benefits. It says: ‘Traditionally household energy efficiency programs have been assessed on the basis of a reduction in energy usage and thereby a reduction in energy costs. In some cases, reduced greenhouse gas emissions were also considered.’

Rather than repeat this narrow exploration, ACIL Allen looked to international experience and to a much broader set of value impacts including:

While not a massive report, there’s a lot in the ACIL Allen work and it’s well worth a read. Its key findings include: ‘Non-energy benefits of household energy efficiency policies/programs (such as increased home comfort and improved health outcomes) could be of greater value than the energy savings delivered by the interventions.’ At ECA’s behest the consultants went looking for qualitative evidence of this, and they persuasively found it.

The ECA, for its part, isn’t just leaving the report to sit on the digital shelf. In September 2018 it convened a Housing Summit in Sydney, bringing together key stakeholders across government, industry, research and community sectors (and a bit of technology too, because I was there for Wattwatchers).

At the Summit, the formative coalition for action on household energy efficiency action issued a communique headed: ‘Consumers call for government and industry to set higher energy performance standards for all Australian homes’. Tying action to the current national political rhetoric about prioritising action to cut household energy bills, the communique says: ‘Any effort to bring down energy bills must include housing as part of the equation. The poor energy performance of our homes and significant increases in energy costs over the past decade mean that many of us are now living in homes that are damp, too cold in winter and too hot in summer.’

The multiple benefits being targeted from a comprehensive national strategy include:

Nor is this just a social welfare proposition, although addressing the needs of low-income households and vulnerable people is undoubtedly and justifiably a key driver. The Housing Summit made it clear that all households could benefit from better energy performance across the nation’s housing stock, and also that the positive impacts can translate into higher property and rental values.

TAKEAWAY: The classic reductionist argument against people spending several hundreds of dollars on installing technologies (like Wattwatchers) to monitor and control electricity usage and track performance is that energy efficiency ‘isn’t sexy’ and that people can’t be bothered going to any sustained effort to ‘save $1 a day off their energy bills’. The ECA backed by the ACIL Allen report is clearly showing that there’s a lot more value on the table than cutting bills in isolation, and it is open to contend that better and more timely (i.e. real-time) energy data can help to unlock the true value of energy efficiency.

STORY 3: The stories above provide the hooks for the Wattwatchers argument that real-time energy data helps to identify and extract the true value of energy efficiency, and also wider smart energy management, for consumers, communities, the energy industry and system, and the overall economy.

For this to work at household level the upfront costs needs to be modest, the ongoing costs need to be sustainable, and the return on investment (ROI) needs to be attractive – although not necessarily confined to dollar savings off electricity bills per se, because in the ‘new energy marketplace’ there will be the multiple impacts on value that the ECA/ACIL Allen work has identified qualitatively, and also other more energy-specific benefits such as optimising solar PV investments, participating in payment-for-performance demand response programs, and right-sizing (and therefore right-pricing) future investments such as energy-saving major appliances, storage systems and electric vehicles.

Data always will only be part of the equation, as is behavioural energy efficiency. A lot of the hard outcomes revolve around building inclusions or modifications such as insulation, draught-proofing, double-glazing, low-energy lighting and appliances, and more. But data also helps to validate the real-world performance of policies, programs and investments in energy efficiency and sustainability, including compliance standards and rating schemes, through actual measurement and verification rather than estimates and deeming.

The most challenging, and frequently the most expensive component of energy monitoring and control technologies is the installation stage. At Wattwatchers, a decade-plus of experience has shown that:

In the intelligent and consumer-empowered energy future that Wattwatchers envisages, data-enabled ‘energy smart ready homes’ will be critical to a Grid 2.0 electricity system that is digital, distributed and demand-responsive. Homeowners and renters will recognise this and will expect that builders, and also real-estate vendors and agents, equip homes to optimise their energy performance and validate this with ongoing measurement and verification.

TAKEAWAY: Policymakers need to update and upgrade minimum requirements for new housing to ensure that homes are equipped and data-enabled to participate in the ‘new energy’ operating environment, for the good of consumers, their communities, the electricity system (gas should be phased out in favour of an all-clean electric future) and the overall economy. Incentive programs should be implemented for well-targeted retrofits, and monitoring and control should be required for installations of solar, storage and large new loads such as air-conditioning units and pool pumps. Builders, and also property investors and financiers, should get ahead of any regulatory moves and incorporate smart energy as a standard feature. There are numerous technology options, to match all use cases and budgets, and no excuse for inaction.

*Wattwatchers has partnered with 1 Million Women for several years, including providing real-time energy data for its ‘Women Power’ pilot a few years ago, when 10 volunteers set out to cut their home electricity use by 20% over three months – and smashed the target, averaging 45% reductions. 1 Million Women and Wattwatchers are planning to revive ‘Women Power’ in 2019 as part of a major new practical energy action initiative engaging households, small businesses and schools. Watch this space.