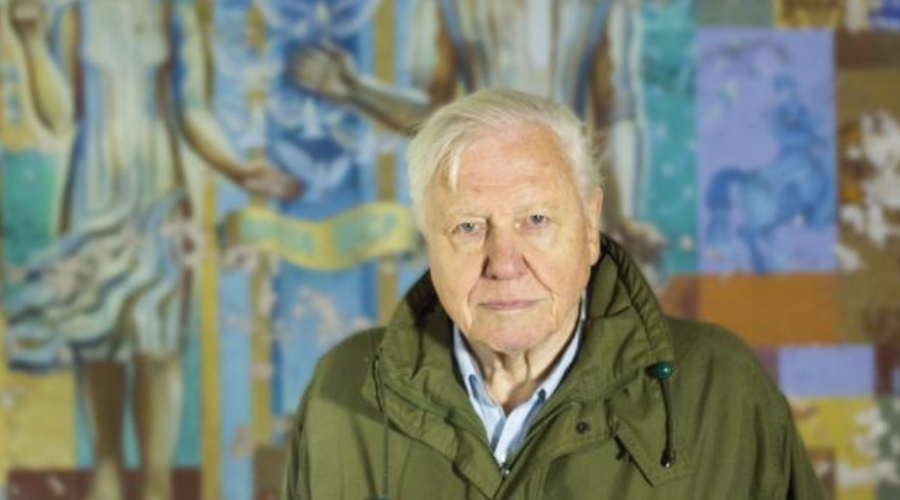 A few nights ago our ‘everyone who’s living at home right now family’ sat down to watch Sir David Attenborough’s latest television documentary, which he presents profoundly as his lifetime witness statement on the ecologically-parlous state of the planet and humanity’s self-generated climate peril. After its emotionally eviscerating conclusion, my partner Nat asked me to say something that would give our young adult sons, one of them a new father himself, hope for our world and their lives ahead. The best I had was explaining why I now present myself as an eco techno optimist.

Three threads from the past few weeks have prompted this post. The most recent was watching ‘David Attenborough: A Life on Our Planet’ with my family … we’ve just welcomed a new grandchild into the world and our household, and we’re feeling collectively hypersensitive about future generations. Before that was the release of the Australian Government’s new energy policy and technology roadmap in September. The other prompt was joining the audience for an author-in-conversation event featuring legendary Australian journalist Marian Wilkinson and her new book ‘The Carbon Club’ (Allen&Unwin, 2020).

Reprising the book event, I found myself uncomfortably torn between deep admiration for Marian’s investigative determination and a gut-wrenching gut feel that it might all be a terribly wasted effort. Delving into the depressing politics of carbon and climate policy is historically important, but I contend that a story of immensely greater future value and right-now motivation lies with the 2.5 million Australian households that have invested in rooftop solar generation. Many of those households, and the thousands more that join them every month, are already thinking about battery storage, electric vehicles and other energy prosumer choices too.

Let me be clear upfront, I have nothing but the highest regard and respect for Marian Wilkinson’s relentlessly forensic journalistic excellence, which I first witnessed as a colleague in the 1980s. I count her as a friend. But more importantly for my life, without Marian’s intervention in my journalism career in the 1990s, in tandem with another friend and media contemporary John Lyons, I would never have become Environment Editor at The Sydney Morning Herald – which is how I came to be immersed in the politics of climate change and carbon policy, including attending and reporting on the landmark United Nations Kyoto Climate Summit in Japan in 1997.

Circa 1996, Wilkinson and Lyons as my senior editors press-ganged me into the environment round at the Herald, when all I wanted to do was continue over a decade of randomly-focused investigative journalism that I’d pursued with multiple newspapers, and ABC-TV as well through stints at The 7.30 Report and Four Corners. Their well-meaning professional redirection set me on a course that totally-unpredictably led to me discovering Wattwatchers a decade later, in 2007, a year in which I’d written my own long-since forgotten climate book (The 3rd Degree: Frontline in Australia’s Climate War, Pluto Press Australia). Wattwatchers, where I still work in 2020, took over a decade to rise from startup to successful energy technology business … a journey which has been transformative for me and my evolving economic, social, environmental and technological world view.

This post isn’t a book review. I’ve only just begun reading Marian’s book, having heard her talk about it at some length in conversation with another legend of journalism and former colleague of mine, David Marr, himself a much-published and highly-successful author. Nor am I saying anything I wouldn’t say to Marian herself, which I did after her event at Whale Beach, on the evening of September 17th, near where I live on Sydney’s northern beaches. It was rare social outing, given the restrictions of the Covid-19 era, which I attended with my partner Natalie Isaacs, founder of 1 Million Women and herself an internationally-published climate theme author (Every Woman’s Guide to Saving the Planet, ABC Books/Pan Macmillan, 2018). We arrived in Nat’s Nissan Leaf all-electric, zero-emission vehicle, charged from our rooftop solar system, and frankly that felt great, and fully on eco-techno optimist mission!

Without doubt, Marian’s research is characteristically extensive, her pursuit of interviewees relentless, and her analysis and storytelling compelling. The Carbon Club is an important book, because the climate crisis is the biggest story of the 21st century (however important a global pandemic may seem right now), and across the spectrum the Australian political class has failed us terribly for over two decades when it comes to responding commensurately to this immense and complex existential threat to both humanity and nature (on which David Attenborough is arguably the ultimate authority among living people). But we can’t get the lost decades back, so better understanding the influences and causes behind the failures I’ve already lived through provides little or no comfort, to me at least.

I confess, over a decade ago I realised I needed to escape the professional world of climate and carbon policy for the sake of my own sanity and psychological well-being. It was a bit like a policy failure version of post traumatic stress disorder. We’d had four children, four human futures in which we are forever invested, with the prospect, now realised twice-fold already, of more to come in the shape of grandchildren. It was too depressing, given the rollercoaster years of policy ups, albeit short-lived, and prolonged downs. So when Marian invited me to her book event, a few weeks before it happened, my first reaction was ‘Gaia bless you’ for investing so much time, effort and intellect in pursuit of exposing climate truths (or, as the book describes itself: How a network of influential climate sceptics, politicians and business leaders fought to control Australia’s climate policy).

On the night, the insight that grabbed me most powerfully was Marian’s framing of the real problem not being ‘climate deniers’, venal and vociferous as they may be, but rather another group of ‘luke warmists’ who insist they accept the science of climate change, but just don’t buy into the urgency for action, disconnectedly thinking we have ‘plenty of time’. Marian sees these ‘luke warmists’ across the mainstream body politic, in business, and notably in her longtime professional world of the media, which once was my world too. Yet, still, that’s just a further explanation for chronic inaction, when our world desperately needs sweeping action now.

Here’s where we segue back to David Attenborough: A Life on Our Planet. I see on the internet that the nonagenarian Attenborough’s documentary is being critiqued as nailing the planetary problems, but missing the political ones. Marian’s book The Carbon Club, meanwhile, is immersed in the problems and failures of climate politics and politicians, and those who surround and influence them; but I think misses the incredible scale and trajectory of the technological salvation that is taking place regardless of the political dysfunction.

To their credit, both Attenborough and Wilkinson do a lot more than merely nod at the dramatic shifts now occurring in our world in terms of where money is being invested, especially renewable energy generation from wind and solar, and the expanding range of other transformative technologies and business models that are getting cut-through in spite of the dire failings of politics and the political class. Their stories, however, are interwoven with their life experiences: Attenborough, as the quintessential 20th century naturalist, quite likely has seen more of the planet’s natural treasures than any other person who has ever lived; and Wilkinson has unlocked more political truths and untruths than most journalists of her generation. But technology, innovation, Elon Musk-style crusading entrepreneurialism, and transformative business models are not their natural territory.

Which brings us back to our third thread of this story, the current Australian Government’s Technology Investment Roadmap and its First Low Emissions Technology Statement 2020; and the latest iteration of a kind-of-energy-policy that preceded it. It’s long been fashionable to bag out Coalition governments in Australia for their failings on energy, carbon and climate policy. This is often richly deserved, and I confess I’ve done plenty of the bagging myself, although I am always mindful that our nation’s alternative party of government, the Labor Party, has plenty of its own failings as well. When it comes to the political mainstream, Australians haven’t been failed by just one side, they’ve been failed by the whole body politic. (This is not necessarily true of other comparable countries when it comes to climate action, for example numerous European nations including the United Kingdom.)

Yet I’m not the only one to notice that a curious thing is happening on the conservative side of politics in Australia. We’ve all seen the policy progress on renewables in Coalition governed states such as New South Wales, South Australia and Tasmania, which are keeping pace with progressive Labor state and territory jurisdictions in Victoria, Queensland, Western Australia, the Northern Territory and the Australian Capital Territory. Even more interestingly, just recently I heard some of the plenary session panelists at the Covid-19 induced online version of All-Energy Australia being cautiously optimistic about the Morrison Coalition Government’s direction.

For climate action purists there’s still much not to like around an ongoing fascination with fossil fuels, mainly in the form of natural gas rather than the waning force of coal, and outdated technological notions like carbon capture and storage. Thankfully, there’s also little traction for the dual economic and environmental folly of nuclear power dreaming.

Wattwatchers has been a fortunate beneficiary of the vision and future-focused financial support that ARENA and CEFC bring to the nation’s clean energy ecosystem, so I’m hardly an unbiased observer. Yet I’m glad at this potential turning of the political tide in Australia for much more than personal reasons, because it is hugely significant that we are starting to see a degree of continuity in good policy, when most of the past two decades has been dominated by tit-for-tat dismantling of the predecessors’ policies every time government changes in Australian jurisdictions. To me, it offers hope that we could move into a more virtuous policy cycle, as has been the case in California where strong public institutions have guided over four decades of US-leading environmental and clean energy reforms, even as a parade of Democrat and Republican Governors have come and gone, and as Silicon Valley has done its best and its worst to reinvent the world.

But heck, I guess that’s just the eco techno optimist in me! In truth, at best what we are seeing is green shoots. It’s not like we’ve successfully re-wilded the Earth yet! Although there are encouraging signs like the international ‘Pledge for Nature’ signed by 64 countries ahead of the recent United Nations Summit on Biodiversity, committing them to take our land-based, marine and freshwater ecosystems on a path to sustainable recovery.

Attenborough cries out to us that life on planet Earth, as he has known it so spectacularly, is perilously close to being lost, yet there’s still hope. Wilkinson tells us the politics of climate and carbon has been woeful, and remains unresolved, yet there’s still hope. Technology tells us help is at hand, that the cavalry can still arrive just in time, mounted I expect on renewables-powered vehicles. Sound the bugle! Fire-up the rooftops! Vote for change, because my message of hope for my children and grandchildren is that we already have the technologies and know-how, and humanity as a global community can actually afford to save our world … we just need the public and political willpower to brush aside the seductive inaction of the ‘luke warmists’, and get on with doing it!

Murray Hogarth is Director of Communications and Community Networks for Wattwatchers Digital Energy. The occasional ‘On My Watts’ posts are his personal observations and reflections.

All Posts »
PrevPreviousCellular vs WiFi for solar monitoring and control: how do they stack up?
NextSix ‘i’s’ of the data-driven, technology-enabled energy transition: integration, interoperability, intelligence, internet (of things), investment and installationNext